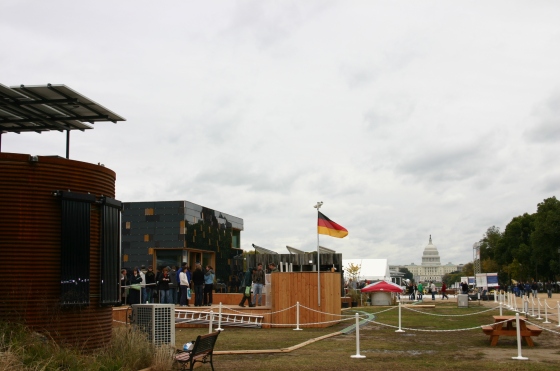 Innovation and Inspiration on the National Mall

I arrived at Dulles,  boarded a sleek modern mass transit system, and  arrived at the Smithsonian on a really cold  (for this California boy) winter’s day. It seemed ironic that the chance for real change was exhibited here in the capitol of the status quo. Positioned between the Washington Monument  and the Capitol building were prototypes of what could and should be the future housing of America and the world.  The forecast of a freezing rain hadn’t dampened the spirits of the people presenting their projects or the curious attendees. I came here to experience and see first hand the array of innovative design and technologies and I was not disappointed.  As stimulating as all this incredible design work and compilation of exciting green technologies was, what had the most powerful impact on me,  and what gives me the greatest hope,  was the exuberant enthusiasm of all the young people participating in this endeavor. That excitement comes out of knowing that they are on the forefront of creating the solutions to one of the greatest dilemmas that plague modern man.  The solar decathalon website. offers an in-depth look at the projects and is well worth a view. I could probably write a book about everything presented, but for now here are a few highlights. 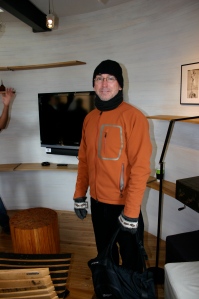 Me in the Silo House

Team Cornell’s use of corrugated metal silos as their design focus was a brilliant use of the agrarian vernacular.   The silos are pleasing to the eye and have great inherent  structural integrity, while utilizing  minimal  materials.  There is something about living in a curvilinear environment lacking in right angles which is reminiscent of life in a beautiful sailboat where everything has its place and form follows function. 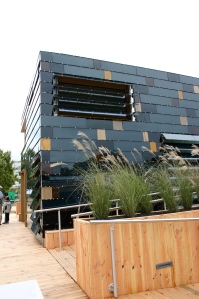 Taking the idea of form following function to the extreme, Team Germany’s house won the competition by being the largest net energy producer. The most obvious feature is their extensive PV panel deployment on the outside of the house, but the really interesting stuff is inside. The interior finish is a drywall material made of phase changing  eutectic salts that stored thermal solar energy.  This material changes phases when heated and stores energy, then as it cools it once again goes through a phase change and releases that stored energy.  Having  done prototyping work with phase changing materials in the 70’s, it was exciting to see this technology being used. 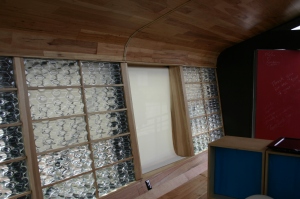 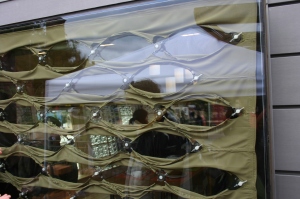 I felt like I was stepping into the future as I entered the Arizona Team’s house;  the first thing you see is the long undulating southern facing water wall.  Engineered and prototyped by one of the team members, it served as a “heat sink” , deterring heat during the day and releasing it slowly at night.  It was designed with vacuüm formed panels that solved the problem of excessive weight of water and could be evacuated to create an insulating barrier. They also had a unique window curtain  of heat activated bimetal which automatically closed with a rise in temperature.  A greenhouse served as a biosphere, filtering greywater, improving air quality and encouraging food production.   The unique challenge of designing for a desert environment where  you can get “too much of a good thing”  pushed water conservation and cooling strategies to the limit in this house.   My mother lives in Lake Havasu where it can regularly reach  120 degrees. The energy demand in these environments is enormous  and growing, making these type of innovative solutions  all the more critical.

Posted by    Harold Powell
To Be Continued……